“Our children come to us so we may recognise our psychic wounds and call up the courage to transcend the limitations these wounds place upon us.” Shefali Tsabary
​
Becoming a mother can be experienced in many ways. Every child brings a new journey, a new discovery, a new mother within us. But with this can also come an overwhelming sense of responsibility, exhaustion and anxiety, as well as emotions that we never experienced before. Many of these emotions have their roots in our unconscious relationship with our own infancy and childhood. This unconscious material which is difficult to express and understand can be explored creatively and safely within the dramatherapy sessions; for instance, myth and stories can provide creative distance as well as a strong container for powerful emotions. The use of movement in dramatherapy is also useful in allowing women to explore their changing body and their sense of self. Dramatherapy, which is usually facilitated in a group-context (although it can be also done individually) provides an added valuable support during pregnancy and early motherhood, helping combat feelings of isolation and loss of identity which many women experience following the birth of a child.

My professional practice focuses on all of these and, ultimately, on facilitating women with an exploration of their own identity, building up resilience and presenting motherhood as a creative journey of personal transformation, through which wounds from the past can be integrated and not blur the relationship between mother and child.

Please send an email if you are interested in individual self-care dramatherapy sessions to explore themes of identity, motherhood, learn soothing techniques and build supports for yourself. You are welcomed to bring your infant if you wish. ​ 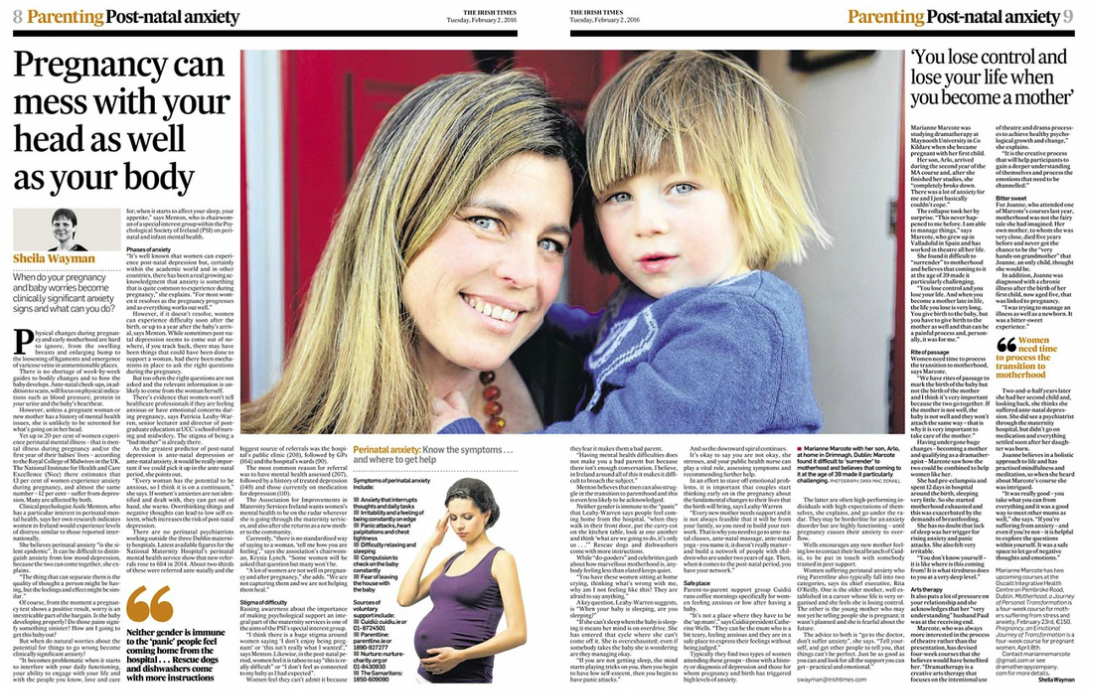 ​Transcript from an article in Maternity and Infant Magazine Spring 2016

HEALING THROUGH DRAMA
Becoming a mother is one of the biggest transitions a woman can make in her life, and like any big change, this can take some time and energy to process. But from the minute a newborn is placed on a woman’s chest, life speeds up – and all too often the woman is left behind while the responsibilities of being a mum take over. In addition, the rhetoric around motherhood is always overwhelmingly positive. We’re expected to be ecstatic with our tiny newborns, and while of course being a mother is a privilege and a joy, it also brings its hardships – yet many women find it’s taboo to say if we’re not enjoying it as much as we think we should. Or if we want to be something as well as than a mum. If you’re reading this and nodding, you’re not alone. A straw poll of mums in our immediate world reveals that pretty much every mum feels like this at one time or another. The snag comes if you don’t have a safe outlet to express these feelings and get any help you need – what happens then? Thankfully there is a plethora of therapies out there that can help, and one extremely interesting option is dramatherapy. Practitioner Marianne Marcote tells us more: “Dramatherapy is one of the creative arts therapies, which includes art therapy, dance therapy and music therapy. It’s the intentional use of drama techniques to promote wellbeing and positive psychological change. It is a creative process that will help participants to gain a deeper understanding of themselves and process the emotions that need to be channelled.”

TIME OF CHANGE
Dramatherapy can be useful in pregnancy as well as beyond the birth. “Pregnancy is a time of change, and it’s a journey into the unknown,” explains Marianne. “From my own experience, you get a lot of physical care during pregnancy, but there was very little that looked at your mental and psychological wellbeing. Then when the baby is born, there’s a lot of emphasis on the baby and the baby’s wellbeing, and in a way, the mother is pushed a little aside, with very little emphasis on the psychological change that the mother has been through. In terms of pregnancy, dramatherapy provides a space in which the mum to be can explore any worries she might have and what her expectations are. As women, we are transitioning from one role to another, and the dramatic form can really help explore this – the dreams, the aspirations, the fears and so on.”

CREATING A SPACE
Dramatherapy can be done on a one-to one basis, but Marianne explains that a group setting is usual, and this has advantages too. “Working in groups is one of the strengths of creative therapies as it promotes a sense of community. The groups are closed, so you might have six or eight sessions but it’s always with the same women. Therefore trust is built and women feel they’re in a safe place and can express things like ‘I’m finding motherhood difficult but this should be the happiest time of my life!’ It’s a common feeling but we can feel ashamed of thinking that way and therefore don’t share it and the feelings tend to build up.” The key is to create the safe space in which women can express themselves. “The courses I facilitate provide a therapeutic and confidential space where women are prioritised, supported and valued, so that they can express and explore in a creative way both the challenges and joys of being both mother and woman. We look at ways of building up resilience, reconnecting with our bodies and easing off the anxiety when it hits hard. We do this through soothing activities, such as mindfulness, breathing techniques and body movement, but also through fun games, creating images with objects, dance and exploring different characters from myths and stories. Ultimately, the course provides a space for mothers to deeply nurture themselves by creatively exploring and re-finding their own voice, and meaningful time to reconnect with their needs, which as mothers we often forget.”

NO PERFORMANCE NECESSARY
The word “drama” can strike immense fear into many people, with memories of having to get up on stage in front of your class in school and sing, whether you have a voice or not – but Marianne explains that dramatherapy is nothing like that. “That’s actually a point we need to get across. It’s nothing to do with performance; rather, we use theatrical processes to achieve psychological change. Theatre processes are incredibly healing; in fact, healing and psychological started in theatre in ancient Greece through their rituals. Dramatherapy is a balance of the two worlds between psychotherapy and drama. “An example of an activity we might explore during the sessions is the drawing on paper of your own Personal Mandala. A mandala is a circle divided into different sections, each section corresponding to one part of yourself. The guided creation of this image helps to reinforce and remind you of your supports, your strengths, your values and skills; you will write those supportive words within the mandala before colouring it, creating a holistic image of yourself, a quick map that can guide you when you need support. The visual quality of the Personal Mandala also works as a soothing and balancing aid.”

Think this is something new? Think again – creative arts therapies have been around in Ireland for decades, but not that many people know about their benefits. “Creative arts therapies have been around for many years,” says Marianne. “This year is actually the 30th anniversary of the Irish Association of Creative Therapies – and it really works, but not a lot of people know about it. The message really is to go and try it, because it’s hard to describe what it is unless you have experienced it. Every woman that I have seen has got a lot out of
the sessions.”